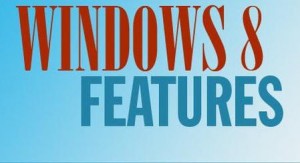 Windows 8 update has been around for a couple of months now. Those who have been using Windows XP or Windows 7 or Windows Vista are eager to upgrade their computers to this ‘better’ version of the Microsoft OS. There is so much work involved in backing up all the data, clearing space for the new installation, the actual re-installation and so on. Apart from these time consuming chores, you also have to transfer the ISO file to a USB pen drive or a DVD for installation. But, all of this makes up for the fact that Windows 8 is decked up with exciting new features like the following:

Thanks to this support, Windows 8 powered PCs and ARM tablets now work in congruence with each other. In a Windows 8 Guide distributed by the developers, it has been said that support for ARM-based chipsets works very well with devices on any part of the spectrum, ranging from 10-inch slates, ultralight laptops to powerful devices with 27 inches of high definition display. This connectivity gives PCs and other gadgets the utility of Smartphones.

Windows 8 runs only Metro style apps which is exclusively Microsoft. Critics had claimed such a limiting change would work against the OS’s favor, but it is evident that the tile based UI has its perks. For one, it is perfect for touch and it has an aesthetic edge over other layouts. While it works quite well with mouse and keyboard, the user interface has certain fluidity in response to touch that has not been seen before.

The Control Panel has undergone radical changes in this new OS; it now incorporates options like Notifications, Privacy, Share, Search, Users, Wireless, Personalize, and General. With more and more Metro style apps being released, you can use the Personalize tool to put what you want in the Start menu and add tiles of your preferred applications. You can re-position the apps and club them in groups.

The Start Screen is a familiar deal for Windows Phone users. There are a set of tiles and each, on clicking, launches an app. They can show information and notification of the apps. You can create such tiles and can be arranged on the screen as you wish. Clicking on the desktop tile will take you back to the old Windows desktop.

With Google Play Store and Apple iTunes dishing out thousands of apps, this was a long time coming. Moreover, due to Windows 8’s inability to run anything but Metro style apps, a dedicated app portal for such apps was necessary. Although it is not nearly as stocked up as iTunes or Play Market, it is getting there with so many paid and free apps springing up daily.

With our virtual lives expanding fast, we need more space than our devices’ hardware can afford. So, cloud computing is becoming really popular. In Windows 8, you can sync all your contacts (Twitter, Facebook etc.), photos, Skydrive data, third-party apps in the cloud with just a Microsoft account.

Microsoft Security Essentials, which has been a popular choice among Windows users as an anitivirus app has now been integrated into Windows 8 as Windows Defender. The interface has not changed much and the features remain intact too. Only difference is that you don’t have to install it externally.

This is probably the most exciting tweak that Windows 8 has to offer. The Internet Explorer 10 browser that comes with Windows 8 is much faster than the previous editions thanks to hardware acceleration and it has quick gesture-based zoom, pan and navigation. You can quickly access the two touch keyboards (an ‘enhanced traditional keyboard and a new thumbs keyboard).

These features show that Windows 8 is not simply an improvement of the previous OS; it is a complete overhaul that works on a different architecture and uses different technology to the core. It has been out in the market for some time now and by the response it has generated, it is definitely a change worth having.

This is guest Post written by Raj giving guest post services on all kind of niches and blogs at http://www.techiestate.com