One of the oldest weapons known to man, the bow and arrow continue to draw our attention. Dating back to the Paleolithic era, evidence of its use has been found going back to 10,000 BC.  What continues to captivate our attention and how has technology kept the bow relevant now? 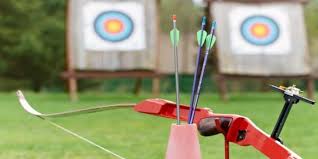 Early man hurled arrows made of pine branches and flint points by hand, prior to the discovery of the bow.  With the discovery that by attaching a gut or leather string across a sturdy bendable piece of wood, and then drawing it back in tension, you could launch the small spears accurately into game, man clung tightly to the bow and arrow.  Archery developed independently in several areas of the world over time.  Evidence exists on every continent of bows and projectiles. Many classic civilizations fielded large numbers of archers in their armies both on foot and on horseback.

Over time, the introduction of explosive propellants and the resulting development of firearms led to the diminished use of the bow and arrow in the developing countries. Though use continued in distant and technologically challenged areas of the globe, the longer range, effectiveness, and ease of use of the new weaponry relegated archery to a pleasurable pastime.

With the advent of the industrial age in the civilized world, the idea of pleasurable games and sport came to be. Archery contests transitioned from a means of sharpening the skills of warriors, to games of skill for re-creationists. Archery societies began to develop, and the sport became a popular pastime for many in the upper classes.  The ease of developing basic skill, the low cost of entry, and the lack of need for vast area to shoot in made archery a very accessible sport for men and women.

As the world developed so did archery.  Modern materials have made archery easier and archers more accurate. Bows have become more complex but much easier to draw.  Aiming has changed as sights have been incorporated and rangefinders for accurately assessing distance have been developed.

Compound bows now incorporate cammed wheels that allow the initial draw to be much easier.  The arms of the bow are made of modern materials, adding strength and saving weight.  The arrows are now aluminum or graphite, with the fletching being manmade.

Rangefinders have been developed to include lasers for exceptionally accurate measurement of distances.  With accurate distance information, multiple sights, accurate to specific ranges can be used to hit targets with high degrees of surety.

The mix of traditionalism with technological advancement has drawn many to begin hunting using a bow and arrow again.  The challenges of getting close enough to a target to be accurate have made archery hunting extremely popular.

Hunting is hardly the only modern pursuit for archers, though, it is still an Olympic sport, and still a very popular recreational activity.  For an ancient method of survival, archery has come a long way.