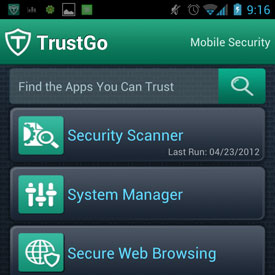 FakeLookout.A is a trojan and it hides itself in an app named “Updates” by Good Byte Labs and was “designed to look like an update to the Lookout mobile security application,” the security vendor said.

“The brazen use of a trusted app’s logo shows just how aggressive malware makers are becoming. These fake apps not only put users’ data and privacy at risk, they can damage the reputation of respected developers,” TrustGo CEO Xuyang Li said, adding, “TrustGo continually monitors new apps uploaded to more than 185 marketplaces worldwide and is able to provide App Certification and Brand Protection services that alert developers when malicious clones and apps that falsely use their logos have been found.”

The virus can steal MS/MMS messages, video files, and SD card files from an android device and later all Stolen data is transmitted to a domain in Thornton, Colo. if this Trojan package is executed, users would experience heavier data usage as the malicious application keeps uploading data to servers.

The good news is that till now no user has reported of being affected by the malware. But there is also a possibility that the users who have been infected are not aware of it as of now.