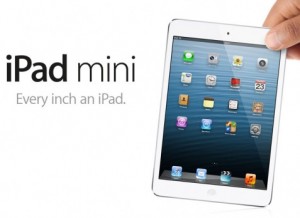 Apple unveiled a smaller version of the ipad called iPad Mini on Tuesday. iPad Mini comes with a 7.9-inch display with 1024×768 pixels screen resolution and is encased in a 7.2mm aluminum shell which makes it 23 percent thinner and 53 percent lighter than the 4th generation iPad, which was announced along with iPad Mini.

The new iPad mini will be available in ‘white and silver’ and ‘black and slate’, it will be up for pre-order starting this Friday, October 26 in 34 countries around the globe.. Apple is charging $329 Apple is charging $329 for the Wi-Fi 16GB model. Prices then go up by $100 for the 32GB ($429) and 64GB ($529) variants, and if you want LTE, it’ll cost you at least $459. The only down side is that  is that unlike iPhone and big iPad, The iPad Mini does not have the high-resolution Retina display.

In the event, Apple announced five new devices along with iPad Mini and they are as follows- Mac mini, iPad with Retina Display (fourth generation), iMac. MacBook Pro 13 with Retina Display, iPad mini. Apple also anounced that it’s upgrading its full-size iPad, doubling the speed of the processor