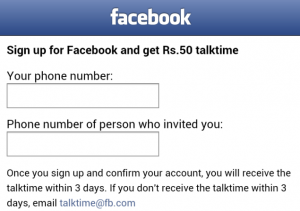 World’s most popular social networking site Facebook, now offering Rs. 50 in India to new users who sign up via a mobile device. New users have to visit the link m.facebook.com/tt and register for the free talktime. If existing Facebook users refer others to join Facebook will also get the same Rs. 50 talktime benefit if they sign up. So, refers others and get Rs. 50 free talktime from Facebook.

Now new users don’t even need email address to register for a new account in Facebook. Just they have to enter their name and date of birth to get their new Facebook account. The process is pretty simple and requires only one or two minutes to complete it. The free talk time will be credited to users’ account within in three days of time.

Facebook has targeted developing countries like India, Brazil and Mexico for this promotion. Although it is a superb idea to get new users but this may lead to many fake profiles. Recently Facebook announced that number of the Indian users accessing Facebook via mobile phones has significantly increased over the last few years.

The social giant had recently crossed 1 billion monthly active users mark and this new scheme will certainly help Facebook increase its popularity in the country. According to the company’s recent quarterly report, about 83 millions of Facebook accounts are fakes.