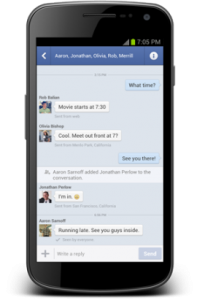 The new Facebook Messenger app allows android users to see online friends to chat by swiping left on the screen. The best thing about this app is that if anyone get bored with same people then they can select specific friends to add to the top of their Favorites in the app for quick access.

Facebook also fixes some bugs for multiphoto selections, device restarts, push notifications and many more. Another new version of the app for iOs devices will be released soon.