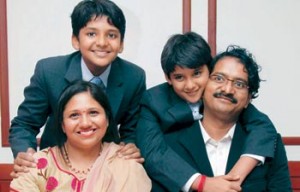 Within two months of its launch on 12th December 2011, Go Dimensions displayed its first app, ‘Catch me Cop’, on the Apple App Store and within two weeks the app got 2,000 downloads.Even the app was featured on cnet.com, the popular website that comes out with lists of popular apps.

Sanjay (CEO) studies in Class VI and Shravan (President) in Class VIII at a local school in Chennai. They have already earned their first $100 by selling ads in the applications.

“We have great plans for the future, to develop applications in the education arena that are cheap and accessible to many,” says the young CEO.

The boys father Kumaran Surendran, 45, is a techie himself and the director of an IT firm.He is the man who taught programming to both of them and now become masters of three languages- Cobol, Basic and Objective-C.

“Our dad helped us a lot. He taught us programming and his guidance made us what we are today: confident programmers” says Shravan.

Hope they will achieve all their goals in coming years.We wish you great success in your business and life.