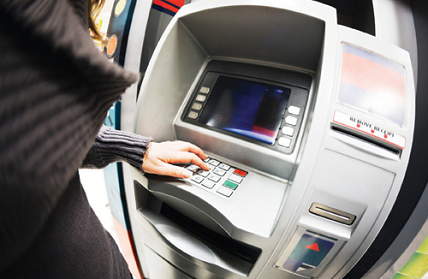 Diebold and Fis Global are working on cardless ATMs that can be accessed with a smart phone. Consumers access the ATMs by scanning their own individual QR code. The scanned QR code is received in the cloud between the smart phone and the ATM. While Wintrust and City National are consulting with Fis Global on that company’s smart phone ATM, Diebold has added a feature to their model that allows consumers to transfer money to anyone on their contact list. The recipient uses a one-time PIN sent in an SMS text message to retrieve the cash from any participating ATM.

Diebold is also creating ATMs with face recognition technology. The ATM compares biometric measurements of the person’s face with a copy that was previously stored by the bank or financial institution. While Brazilian manufacturer Itautec has already released the technology in Brazil, more work needs to be done in the U.S. to assure ATMs recognize the difference between a clear 2D photograph placed in front of the machine’s camera and the 3D image of the person’s face.

JP Morgan Chase has partnered with technology firm Fujitsu to create PalmSecure, a palm-scanning ATM that identifies customers by their hand prints. Consumers hold their hand above the machine as the scanner sends out infrared rays that are absorbed by the blood flowing through their veins. In seconds, the scanner snaps a picture of the pattern created by the veins and identifies the consumer by comparing that pattern with the pattern stored by JP Morgan Chase. Fujitsu’s PalmSecure is already in use in Japan and Brazil.

Even before the palm scanning ATMs are operational in the U.S., JP Morgan Chase has installed 1,000 Express Banking Kiosks in 400 of its U.S. branches. These kiosks distribute one-dollar and five-dollar bills as well as $20 bills so that consumers can come closer to withdrawing only the amount that they need. These new ATMs also offer consumers higher daily withdrawal limits.

Diebold ATMs created for Dollar Bank and Bank of America provide consumers with access to live tellers via Webcam. Consumers can make loan and credit card payments, and, if they do not have their bank cards, consumers can access their accounts with a government-issued photo ID such as a driver’s license or a state ID card issued to non-drivers.