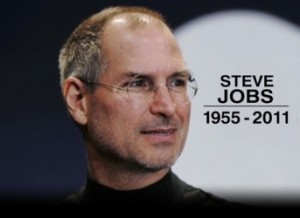 Today is the first death anniversary of Steve Jobs and tributes and remembrances flooding the internet in memory of the tech icon. In such a occasion, we have collected 16 great quotes by Steve Jobs.

1.  If you want to live your life in a creative way, as an artist, you have to not look back too much. You have to be willing to take whatever you’ve done and whoever you were and throw them away.

2.  You can’t connect the dots looking forward; you can only connect them looking backward.

3.  My job is not to be easy on people. My job is to make them better.

5.  People think focus means saying yes to the thing you’ve got to focus on. But that’s not what it means at all. It means
saying no to the hundred other good ideas that there are. You have to pick carefully.

6.  Quality is more important than quantity. One home run is much better than two doubles.

7.  Being the richest man in the cemetery doesn’t matter to me… Going to bed at night saying we’ve done something
wonderful… That’s what matters to me.

8.  Let’s go invest tomorrow rather than worrying about what happened yesterday.

9.  Your time is limited, so don’t waste it living someone else’s life.

10.  You can’t just ask customers what they want and then try to give that to them. By the time you get it built, they’ll want something new.

11.  sometimes life hits you in the head with a brick, don’t lose faith

13.  Remembering that you are going to die is the best way I know to avoid the trap of thinking you have something to lose.

14.  I’m convinced that about half of what separates the successful entrepreneurs from the non-successful ones is pure
perseverance.

16.  Be a yardstick of quality. Some people aren’t used to an environment where excellence is expected.