As you have decided to develop your mobile app, the first and foremost crucial thing is to choose the right mobile app development platform among Android and iOS. Then, you can contact a mobile application development service provider who can help you choose the best platform. 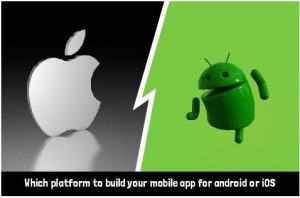 Android and iOS both platforms are unique and functional in their way. They have the latest features and functionalities which provide smooth mobile app development.

You can choose the operating system platform as per your convenience, targeted audience, and budget. You can also select a native platform to develop an app on both platforms.

Let us look in detail at both operating system platforms to solve your problem.

A mobile application is built using the Android operating system using the software development kit on the android studio software to build an Android app.

It is a multitasking operating system used to develop mobile apps for smartphones, tablets, TVs, wearables, and much more. It is mainly an open-source Linux-based operating system.

Nowadays, every android mobile phone supports NFC, enabling electric devices to connect easily nearby. The primary purpose of using NFC is easy and better transactions, which are more straightforward than a credit card or cash.

Hence, many devices are not supporting NFC, but it is predicted that NFC will be the new method of transaction in the coming years.

The Android operating system supports multiple types of keyboards and makes it easy to install the applications such as SwiftKey, Skype, etc., introducing various ways to change your keyboard quickly.

Other mobile operating systems do not support multiple keyboards, or else the process to install it and use it is very time-consuming.

Android operating system platform supports an inbuilt infrared transmitter that will enable you to use smartphones and tablets as a remote control. In addition, you can efficiently operate AC, TVs, and intelligent electronic devices with its help.

While it is possible to withstand some smartphones to customize the home screen, Android has capability from the beginning. To build an android app, firstly, you need to install a third-party launcher such as Nova, Apex, or Slide, and you can even add gestures, updates shortcuts, or performance enhancements.

Apple iOS platform is the operating system used for iPhone, iPad, and other devices based on Apple. It is the world’s second-largest platform used for developing mobile devices.

The iPhone offers a feature known as multitasking. It was initiated from iPhone 4 and iPhone 3Gs. With the help of the multitasking feature on iOS devices or using a multi-finger gesture on an iPad, you can quickly go from one app to another at any moment.

Sharing content and exhibiting an activity flow are just a few simple ways iOS makes it simple to coordinate social network interaction within the application.

Apple’s iCloud is a service that offers data storage based on the internet. It is accessible on all Apple devices, has some Windows compatibility, and handles most of the operation in the background.

It is end-to-end encrypted. It also provides a backup option to help users store their data.

It is one feature that is available on all of the Apple platforms. It will provide users with material and services such as digital items, subscriptions, and premium content, within the application.

You can even use the App Store to advertise and sell in-app purchases.

Difference between iOS and Android

Java is used to build an android app. It requires a bulk of code to be written. Whereas for iOS, a language known as swift was designed. The coding speed on swift is more as compared to java.

Java developers take more time to code as compared to swift developers. Java has an alternative language known as the Kotlin language, which is fully operable with java. It is easy to read, and Kotlin is the new language to develop android apps.

Earlier developers used the Eclipse tool as an environmental tool for android app development. Later, Google introduced Google Studio, which the developers highly accepted because of its excellent possibilities.

When selecting a platform for mobile application development, you need to be very careful. You have an idea of both operating systems to compare and choose the best amongst them easily.

Suppose you are still confused about choosing between both operating systems. In that case, you can take the help of a mobile application development service provider to guide you to select the best suitable platform.