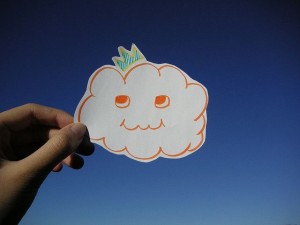 It seems these days as if all talk in the IT and telecoms sector is of “the cloud”. As more and more enterprises turn over their computing and data infrastructure to cloud computing, this omnipresence is only set to increase. But what is cloud computing and how does it actually work? Here’s a potted guide:

Cloud computing is the popular name given to computer processing via the internet, whereby all of an enterprise’s hardware, applications, data, procedures and communications are dealt with online, and overseen by a professional cloud computing company. The “cloud” is the collection of software and storage facilities accessible online that makes this possible. Whenever we use web-based email such as Gmail, we are using cloud computing. And now that increasingly sophisticated technology makes possibilities such as a cloud based contact centre a reality, it would appear that the sky is the limit.

The front and back ends of the cloud

When you get down to the nitty gritty of how these web-based computing services actually work, you must first split the system into two areas – the front end and back end, both connected via a data centre network, or via the Web. The cloud computing client sees the front end in action from their computer work station, which contains the computer or network using the cloud, plus the application it requires to access this, while the back end is a conglomeration of servers, data storage networks and computers – either together in a dedicated data centre or themselves spread over the Internet.

Overseen by the middle

This sprawling system is overseen by a central administrative server, which is able to monitor the internet traffic going back and forth and the demands being placed on the system by its clients. The protocols it follows and its ability to communicate with other computers is down to something called middleware – a specialised form of software. Taken together, you have a cloud computing system that is right in the middle of revolutionising how modern business works.