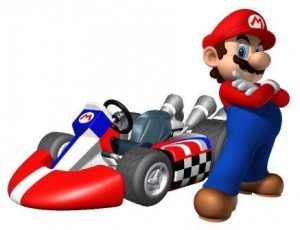 Looking at the Mario Kart series from its inception an incredible 20 years ago right up to the latest offering, Mario Kart 7 in 2011, it is easy to see why the franchise has been included in list after list entitled ‘The best game…’; even capturing the top spot in the Guinness World Records ‘Top 50 Console Games Ever’ for both initial impact and lasting legacy.

The short answer is that the Mario Kart series is so popular because the games are very good; top in innovation, ease of use and featuring brilliant graphics that allow the player to immerse him or herself in the game. The very first in the series, Mario Kart for Super Nintendo Entertainment System or SNES, released in 1992 was very advanced for its time, offering a glimpse of modern 3D rendering techniques with scalable and rotatable designs which offered, for the time, a unique, modern and exciting faux-3D feel to the gameplay. The latest edition, Mario Kart 7 for the Nintendo 3DS, has been named the best game of 2011, clearly showing the durability of the Mario and Mario Kart brand. The family friendly game Mariokart capitalises on the separate popularity of Mario and his friends, enabling the players to choose to be one of 8 of the distinctive and lovable characters, and humanity’s love of racing and competition. Gameplay is based on a straightforward racing game, but the series is saved from becoming stale by the power-ups, unique to each character for endless variety; the courses, which are exquisitely designed and rendered with new features and twists and turns for each generation of the game; and also by the ability to create some mayhem by playing a battle challenge where the purpose is not so much to be the fastest but is instead to cause as much havoc and damage to your opponents as you can!

Year on year, each version of Mario Kart has retained the top place by staying ahead of the design trend of the gaming world. Nintendo prefer to produce multi-player games, as the ability to compete with different friends and family members gives the game greater scope and universal appeal; from two youngsters bumbling around the track giggling and shrieking to serious international gamers who play online for world records; almost everyone can and does enjoy the family friendly game Mariokart!