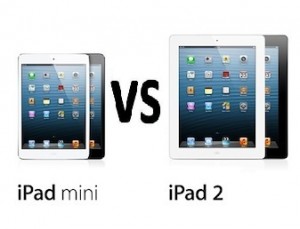 With the release of iPad, Apple took over the market of the Tablets. iPad still persists to be one among the leading sellers for Apple. But the launch of Android tablets like the Google Nexus 7 and Kindle Fire HD in the diminutive tablet segment led to the discovery of iPad Mini by Apple. The new iPad Mini has the internal configuration as that of iPad2 to remain within the budget of the users, but the speed is better as compared to the former. Though price wise iPad Mini doesn’t compete with its android counterparts, instead it stands against Apple’s own iPad

Following comparison between iPad Mini vs iPad 2 will be a help, for those who wish to buy an Apple tablet in the price range of 300-399$.

Both the iPad Mini and iPad 2 have a brilliant feel common in all the Apple devices. The build is delightful and the device is sturdy. The iPad 2 is 8.8 mm thick whereas the iPad Mini is 7.2 mm. The differentiating factor between the two is their weight. Whilst iPad 2 weighs in 603 gm, iPad Mini is just 308 gm. For those who prefer slim and light-weight devices, iPad Mini is a good option.

The new devices from Apple are provided with Retina Display.This kind of display has a very high resolution even on a small screen and results in a sharper image, also pixels are not noticeable to the naked eye. So, you get a very vivid image of superior quality. Both the iPads have the same resolution. iPad 2 is a 9.7 inch screen and the iPad Mini comes with a 7.9 inch screen, but apparently the iPad Mini has a higher pixel per inch value of 163 ppi while the iPad 2 comes with 132 ppi. Thus iPad Mini provides a better resolution to screen size ratio, but for those who prefer bigger displays more than pixel count, iPad 2 is an ideal choice.

Although the sectors of iPad 2 and iPad Mini are different, but they are compared mainly because of same price and hardware. Both of them uses the Apple A5 system on the chip. The dual core processor is clocked at 1 GHz, there’s 512 MB of RAM and PowerVR is SGX543MP2 GPU. Considering the yardsticks, iPad2 and iPad Mini have the same level.

Both the iPads come with basically the similar purpose, OS and applications. But the iPad Mini uses the new Lightning connector, so for all those aged peripherals, you require to purchase costly adapters. The need of the user may help in deciding between the two, those of you looking at the form factor, the iPad 2 presents better value for money because it’s a bigger device. But if you are looking for compact devices with good cameras then the iPad Mini is good.

Have you decided which product you would buy this festival season? In any case, you might want to try out some of the best iPad apps like Newsify. Also check out iPad mini alternatives if you’re on a limited or tight budget.