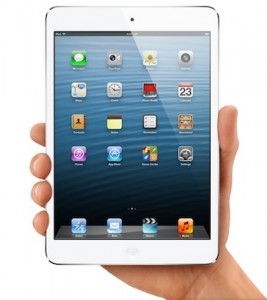 Today marks a day that millions thought would never come and Mr. Steve Jobs himself assured us was firmly in the realms of fiction. As of right now, the 3G and 4G cellular versions of the iPad Mini are officially on sale – the device having once been ruled out by the late Apple co-founder as something of little to no interest or value. Of course, times move on and the launch of the Amazon Kindle Fire last year proved that there was indeed a market for smaller tablet PCs – a very large one and a very, very lucrative one to say the least. Fast forward a year or so and Apple has well and truly jumped on the bandwagon, to some extent playing catch-up for the very first time.

However, while it is usually a case of Apple launching a product, sitting back and watching it bury its rivals in about ten seconds flat, the iPad Mini seems to have its work cut out in winning over the masses. Not that it isn’t a wonder to look at, play with and behold in its own right, but from the very moment the device range was announced, huge swathes of the consumer public have made a beeline for pastures new – or at least pastures cheaper.

The biggest, perhaps the only problem with the iPad Mini is its price-tag. Given the fact that the Amazon Kindle Fire HD and the Google Nexus 7 have been clearing house with their $199 price-tags, the $329 launch price of the iPad Mini seemed a little steep from the start. So steep in fact that its very announcement triggered a massive 48-hour Nexus 7 sales-stampede as those that had been holding out said “Thanks but no thanks!” having found out the price.

And it isn’t a case of paying extra for better value for money either – Apple’s iPad Mini reportedly makes Tim Cook and his army around $180 for unit – its two rivals taking home no less than a third of that per unit sold.

Do I really want to sell my xbox in order to pay the extra premium and know it’s only going into Cook’s pockets? Of course not, and here’s where the problem with the 3G and 4G Cellular versions comes in.

Does Apple really think buyers are going to snap up a modestly capable mini-tab that costs more than an iPad 4, an iPhone 5 or even THREE Google Nexus 7s? Apparently they do, which means they seem to have pegged the iPad Mini for greatness in a market that I for one am not aware of the existence of!

Call it scepticism or cynicism all you want, but Google and Amazon have proved that today’s market is a sucker for a bargain – something the iPad Mini is certainly not.

Author :- This post was brought to you by Lisa Morton, who loves blogging about all things electronic and occasionally writes the odd food review.