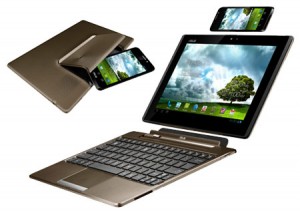 Asus has officially announced the launch of its unique 3 in 1 device called the PadFone in India. This device can be used as a Tablet, Notebook or as a Smartphone and the price of Asus PadFone in India is Rs 64,999.

The PadFone comes with a 4.3 inch screen that supports 960×540 pixels resolution and the device runs on Android ICS. PadFone is powered by a dual-core Qualcomm Snapdragon S4 processor clocked at 1.5GHz and is also equipped with 1GB of RAM, an 8 megapixel rear camera and a secondary VGA quality front facing camera for video calling.

When the smartphone is connected to the PadFone Station, it becomes a 10.1-inch tablet and when you connected it to a keyboard dock then it becomes a notebook.

The PadFone Station has a 10.1-inch 1280×800 pixel display which can be used with the supplied stylus for extended functionality, something like the Galaxy Note II. Other features include an 8 megapixel rear camera and a secondary front facing 1.3 megapixel camera, 2GB of RAM, 6,600 mAh battery, two USB ports, micro SD card reader and many more.

The device was first shown off in 2011 during Computex event but since then delayed the launch of the tablet in India due to several reasons. Asus PadFone expected to come in market sometime in 2013.Some of the tablet optimized apps will not be available for PadFone as Google Play Store recognizes this device as a smartphone.The major drawback of the product is its price. Yes, it is ridiculously overpriced.