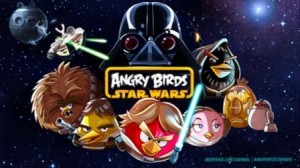 World’s one of the most popular mobile game maker Rovio announced on Monday that “Angry Birds Star Wars” will launch on November 8 worldwide. The new game will be available on Android, iOS, Amazon Kindle Fire, Mac, PC, Windows Phone and Windows 8.

Peter Vesterbacka, CMO of Rovio said “This is the best Angry Birds game we’ve ever done. It’s the best part of Angry Birds with all new cutting-edge gameplay set in in a galaxy far, far away. As a big ‘Star Wars’ fan myself, I’m really excited about this new universe. The Force is definitely strong with this one.”

Colum Slevin, Vice President & Head of Studio Operations for Lucasfilm Ltd. said, “People seem to instinctively know what to do when handed a lightsaber or a bird in a slingshot, so this is a natural combination.”