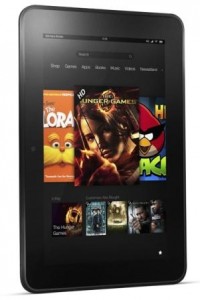 By launching the new Kindle Fire HD, Amazon aims to challenge Apple, Google and Microsoft Corp in the booming tablet arena. Interestingly, Amazon has all the digital content that Tablet and smartphone users are looking for now a days.

Though, there are lots of differences among the three new tablets but all fire HD devices boast an IPS display, and the non-4G versions both harbor 16GB of on-board memory.

The world’s largest Internet retailer, which got into the tablet market last year with a 7-inch tablet will start selling their high-definition screen tablets on November 20, that works off either WiFi or fourth-generation wireless broadband called 4G.

The all new Kindle Fire HD 8.9 has a TI OMAP 4470 processor, a front-facing HD camera, dual speakers and HDMI out. According to Amazon, this new tablet offers 11 hours of battery life. It is also the first tablet supports a dual-band (2.4GHz, 5GHz) MIMO technology and it makes the device’s WiFi 41 percent faster than the latest Apple iPad.

Here is a great news for all of you, Pre-orders for all three options start today.
http://www.youtube.com/watch?v=VYi1jZXz9Kg