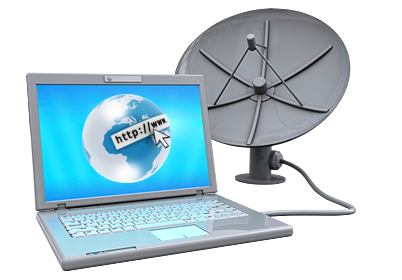 When you’re looking at signing up for Internet service, you have several options. Dial-up Internet is available anywhere you have phone service, but it is slow, ties up your phone line, and expensive for what you get. Cable and DSL Internet is faster, but you will pay more for it and they depend on having access to cable networks and systems that rural areas don’t have. Satellite Internet is an appealing intermediate option for those looking for something better than dial-up but more accessible than DSL or cable.

Satellite Internet is often plagued by myths such as cloud cover affecting the Internet speed (it doesn’t) or you needing to install a bulky dish (a professional will install a slim antenna). Even if you have avoided these myths, there are some practical concerns many people have about satellite Internet, so it’s good to know why other people choose satellite delivery of their connection. Here are some of the top reasons.

If you are stuck in a rural area without hope of DSL or cable Internet, you’re probably sick of dial-up Internet. It is slow, takes time to connect and disconnect, ties up your phone line, and simply costs a lot for what you get. Trying to download your vacation photos or even load some websites can take minutes, and if you want to download software updates, you’d better be prepared to leave your computer on overnight. Satellite Internet offers speeds of 1 to 2 MB/s, which is far better than dial-up will typically give you.

Works with any operating system

Some dial-up providers and particularly small ISPs will only offer service to certain operating systems. If you don’t have a standard Windows operating system with the latest version installed, you might be out of luck. Mac OS X and Linux users prefer satellite Internet because it doesn’t depend on having any particular operating system. You can even use gaming consoles and other Internet devices like your iPhone with a satellite connection.

The most common reason people choose satellite Internet is because they can’t get any other decent Internet services in their area. If you are in a location where there is an Internet service provider monopoly by one provider who doesn’t offer very good service, you know how frustrating it is! Satellite Internet is not dependent on your location, and you can install it as long as you have a solid surface like a house roof or pole to use so the installer can attach the antenna. Cloud cover doesn’t affect your Internet service.

If you’re sick of having your phone line tied up, needing to use a particular operating system to get Internet service, or simply not having any other choice, satellite Internet is the way to go. It gives you better speed than you will get with dial-up Internet and the flexibility to use the Internet on the devices of your choice. It’s good to be connected in today’s digital world, and soon you won’t even know why it took you so long to make the switch.