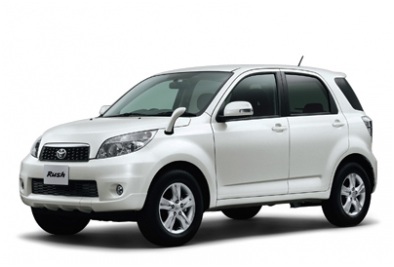 Toyota, the trustworthy automaker from Japan, has carved a place for itself in the minds of the people by offering them excellent cars. It is no wonder that Toyota cars are among the most loved cars all over the world. A true multinational, the success of Toyota can be attributed to the ability to tailor make its cars to suit the needs of the buyers in a particular market. This is evident from the fact that even though it is known to make big cars, in India, Toyota has offered small cars like the Liva.

India is one of the most important markets for Toyota, thanks to a growing demand for various types of cars here. The latest trend is in favour of SUVs and Toyota is expected to join the race by introducing a new SUV in India, named Rush. This compact SUV has already debuted in many of the world markets and hence, the Indian buyers are eagerly awaiting its Indian launch.

Rush has been lined up for an Indian launch for some time now. It is expected in the Indian market sooner than later. This seven-seater SUV, when launched, will take on the likes of Maruti Ertiga, Honda Mobilio, Chevrolet Enjoy and many more. The Toyota Rush on Road Price tag is expected between INR 800000/- to 1100000/- (ex-showroom) in India. This price seems to be competitive enough to excite the potential customers.

An elegant and spacious SUV, the Rush will feature a highly powerful engine under its hood. It will be offered in both petrol and diesel variants. The engine on duty will be a 3SZ VE four-cylinder engine capable of generating peak power of 88 KW and a maximum torque of 141 Nm. All the editions are fitted with identical DOHC engine that uses VVT-I technology, which facilitates the closing and opening of the valves faster. This in turn, leads to better fuel economy. The transmission would be five-speed manual or a four-speed automatic, which will have a well-made grate shifter mechanism. The engine on the petrol variants will be a 1.5-liter mill and on the diesel variants, it will be a 1.4-liter D-4D turbocharged diesel unit. The petrol variant of Rush is expected to offer a mileage of 14.7 kmpl, whereas the diesel variant is expected to return 17 kmpl or more of mileage.

The Rush is a stylish car on the exterior, with elegant features. It carries the elegancy on to the inside as well. There is an excellent music system, three-spoke steering wheel with audio controls mounted onto it, and many such comfort features in the cabin. ABS with EBE (equitable break force distribution) and SRS airbags are expected to increase the safety of this wonderful car.

Now buy used toyota cars in india by simly log on to autoportal.com.