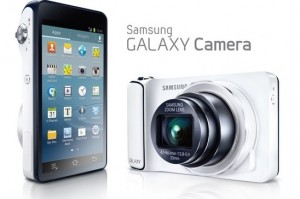 Almost after one week, Nikon launched world’s first android based camera, another pupular mobile manufacturing company Samsung announced android 4.1 jelly bean based camera. But this Samsung camera seems to have better software and hardware as compared to Nikon Coolpix S800c.

This new android based camera is called Galaxy Camera and comes with a host of cool features including a 4.8-inch HD Super Clear LCD screen, 16-megapixel sensor and a retractable lens that has 21x optical zoom. The device features a quad-core 1.4GHz SoC (probably Exynos 4), 8GB of internal storage and weighting is just 305g.

Apart from this Galaxy Camera features optical image stabilization as well as funky zoom and all can be controlled via an independent button or by the touch screen. It also includes Wi-Fi and 3G connectivity through which users can upload images to various social networking sites like Facebook, directly from the cool looking android based camera.

Samsung has preloaded some cool photography apps on the device to enhanced editing experience of its users. Another cool feature of the phone is that the device will automatically back up all photos you shoot,in the cloud. Users can also use Google Play to download various third-party photo editing apps.

The Samsung Galaxy Camera will launch in the fourth quarter of this year.But the price of the device is not yet revealed by Samsung.