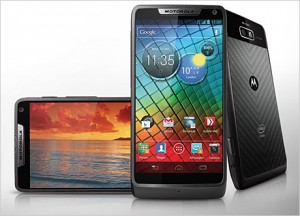 The new smartphone from Motorola, the RAZR i is growing in popularity as a mid range option for phone buyers. Coming with an Intel Atom processor that can deliver 2 GHz of power, the RAZR is also distinguished by its 4.3 inch edge to edge screen, making it one of the best value phones in its class. Throw in an excellent battery life, and a recent OS upgrade to Android Jelly Bean, and the RAZR i should be considered as a good choice for smartphone users.

In terms of power, the Intel Medfield Atom processor’s 2 GHz is achieved via single core threading, but puts the RAZR i into a similar category to its dual and quad core rivals – the phone is only slightly slower than the iPhone 5, but you get a lot more for your money in terms of value to speed. The RAZR i also comes with 1 GB of RAM, with options for 32 GB on a Micro SD. Jelly Bean is now the latest OS for the new smartphone, with older models launching with ice Cream Sandwich.

The stand out feature of the new RAZR is perhaps, though, its 4.3 inch Super AMOLED screen; while the phone itself only has dimension of 122.5 x 60.9 mm, it uses an edge to edge design to make full use of its width. The screen has a resolution of 540 x 960, and is protected by both DuPont Kevlar and Gorilla Glass. Micro USB, Micro SD, and SIM features on the phone itself also add to a handset that is light enough to hold in one hand.

With Android, you get the usual open source collection of apps, as well as Motorola features like Smart Dialler, as well as a simple interface. Widgets are included with the interface, as is a Smart Action feature that allows you to set up different profiles for the RAZR i, depending on what you need to do; this includes checking for and connecting to a Wi-Fi connection, and idle and in use battery optimisation.

You can expect to get Wi-Fi, 3G, GPS, and Bluetooth through the RAZR i as standard. In terms of battery life, the RAZR i does have an advantage over similar phones in its class by featuring a 2000 mAh battery – this means that the RAZR i can be used fairly intensively – Internet, calls, apps – for about a day or two before having to be recharged.

In addition, the video playback is smooth enough to run in HD with the Intel processor, while you can connect the phone to your desktop or laptop via USB to transfer over data, and to sync up with apps and online subscriptions. The 8 MP camera that comes with the RAZR i allows for multi shot features, and also has HDR. When combined with the general smoothness of Jelly Bean, and the power of the Intel processor, you can expect to be able to handle most smartphone tasks without too much effort.<