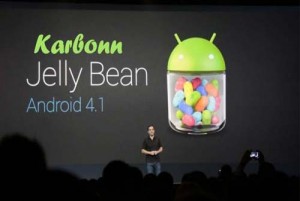 India’s one of the leading mobile manufacturing company Karbonn is all set to launch a new Tablet in September 2012, which will be powered by Android 4.1. Jelly Bean. The all new Android 4.1 tablet will be powered by an attractive  9.7 inches display  with Gorilla Glass protection.The device comes with a 1.5 GHz CPU.

Expected market price of the tablet is Rs 11,000.Other features of smart tab 4 includes Wi-Fi, Bluetooth and 3G via external device. However the subsequent line of the tablet will equipped with a 3G slim slot. Karbonn is also planning to add push mail and instant messenger feature with this Android 4.1 jelly bean tablet.

Intel, the renowned PC processor company has joined hands with Karbonn to launch Intel-based Android smartphones and tablets in India.

Pardeep Jain, managing director, Karbonn Mobiles, said “Karbonn Mobiles will launch an Intel based Android smartphone by year end in India. Our research and development team has been working with Intel on this project for quite some time now.”

Karbonn recently launched its first Android based tablet with 1.2 Ghz processor with a price tag Rs 6,990 and also unveiled three new smartphones on Google Android’s Gingerbread platform in the price range of Rs 5,790 to Rs 9,490.

Till now Google Nexus is the only tablet updated with Android 4.1 Jelly Bean.