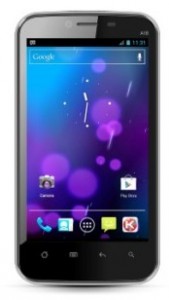 Karbonn Smart A18 has a 4.3″ LCD display with IPS new technology for better viewing angles. The device is run on a high-powered 1 GHz processor and backed up by 512 MB RAM which provides for smooth functioning of applications and games on the device.The phone comes with a 5 megapixel Autofocus primary camera which supprts features like ‘Face Detection’ and ‘Burst Mode’. The phone also has a 1.3 MP front camera which can be used for video calling.

Karbonn Smart A18 supports Dual SIM cards out of which SIM 1 is used for 3G data connection and another for 2G data. Other features include 3.5mm headphone jack, Expandable memory upto 32GB, USB Tethering and many more. It also has some pre loaded softwares like Google Currents, Google Maps,Google Search & Gmail, Facebook, Whatsapp, KarbonnSmart  Browser, King Soft Office, NexGTv, PayTM etc. Though the market price of android smart A18 is Rs, 12,990, you can buy it online at Rs 9,790 in Flipkart.com.