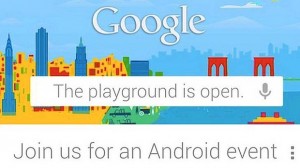 Google has sent invitations to the press on Wednesday for an Android event that will be taking place in New York on Monday, October 29. In the event Google is likely to showcase the next generation of Nexus smartphone. There’s also another rumor that Google may launch next Android’s OS, dubbed Key Lime Pie in this event. There has also been widespread talk of a 32GB version of the Google Nexus 7 tablet as well as a 10-inch Nexus 10.

The event will take place at 10 a.m. on October 29 and will also be live-streamed for the masses at YouTube.com/Android. So, if you have not received any invitation from Google, you can watch event live from any part of the world.

The whole tech world is excited for this event as the invitations didn’t disclose what exactly would take place on that day. It would be also not a big suprise if Google launch multiple products in this event. The tagline of the event is “The playground is open,” also not specified much about the event. We have to wait wait for October 29 to know exactly what Google’s got in store for us.