Samsung is going to introduce its next generation Galaxy note phablet to release in the second half of the year. With a successful flag ship Samsung is possibly trying to explore a three side display that will help users to access at ease. As per review this year might be the year for Smartphone lovers it has been expected to have top products from different manufactures. But the release of Note 4 design will definitely raise anticipation for handset users. 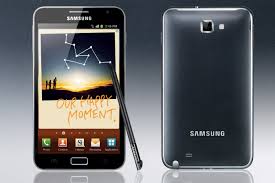 Various prototypes are being released on part of Samsung indicating to have a flexible screen and will allow users to read the messages at an angle. Rumours are on for what kind of functionality and technology will be implemented for Galaxy Note 4. This concept phone is much expected to release by end of 2014.

With the release of the next model in the history of Note series to have a screen size of 5.9 inch of either 2K or probably more than 4K resolution as per recent rumours. The new model will definitely have more powerful processor and a larger S Pen. The release of both Galaxy S5 and Note 4 will surprisingly add to new version of Samsung TouchWiz which would include a new app from Samsung called “Life Times”.

If the significant three sided display is made consideration then the next model will be made of plastics that are unbreakable, which would out danger your phone for shattering its display if dropped from a height.

It has been rumoured of Note 4 of being featured with a 20 megapixel camera with an embedded optical image stabilization technology along with additional features like curved or flexible display and an additional fingerprint sensor. There are reasons to have 20 megapixel and not having 16 megapixel camera as per existing rivals in the market such as Nokia Lumia 1020 has a camera of 41 megapixel and Sony Xperia Z1 which has a camera of 20 megapixel will definitely help new Note 4 to end up with 20 megapixel or even higher. It’s not only the pixel size that will get enhanced but the technology will certainly help people to click photos even in dense light areas.

From technology to technology Samsung has always been recognised as one of the innovators than being a follower which supports the fact of having a higher version than that of the rivals and other previous featured models. And as per record unlike other manufactures, Samsung never stays behind from the rivals in different factors that includes smart features and along with ultra fast hardware systems.

Samsung has announced this device during the MWC 2014 conference in September and has concerned its release by late this year. The prediction made to release of trend that Samsung follows do depends on the market conditions and also look at others rivals are doing with their products. For the next year a couple of good smartphones are being lined up the following companies like LG and HTC which may affect to the release date of Galaxy Note 4.