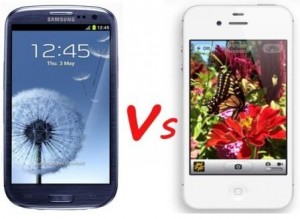 The party is now started between Apple and Samsung again. After marching a victory for both of their products in Samsung Galaxy S3 and iPhone4S they are now planning to hit back again. Now as on date Samsung galaxy S3 to be a massive hit and tomorrow on 12th September Apple iPhone 5 will be released to beat its record. Till date as per the sources there are 10 Billion products sold for S3.

Apple are making their way on and telling that they can defeat the sales of S3 soon after the launch of iPhone 5 next week probably. So here is a short comparison between Apple iPhone 5 vs Samsung Galaxy S3.

A slight difference is alone seen in Screen Display.In the past iPhone has a display of 3.5″ and here there will be display range varying from 4″ to 4.2″ where the display of S3 is 4.9″.

As usually iPhone 5 is more compatible than Samsung Galaxy S3 as the width and height are not enough to sit inside the Pant or Shirt Packet of Men in S3.

There will be definite difference in the Charger Pin as they sources say that there will be a nine pin connectivity which is as same as the Micro USB connector.

When coming back to the Camera Focus in and Out, iPhone 5 beats their arch rivals as they are available with 3D Focussing and thus they succeed in this silly vampiring focus.

Its finally told that there will be an option of either looking forward whether to click out S3 or iPhone 5.but nothing can be told until the product hits the market. So lets wait.