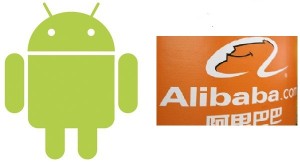 Competition is seen within us and now in the Technology field, there are more than a handful of competitors who compete to make them to withstand them at the first place.That too in Mobile and IT Software, the game is on. Now the trending Smartphone Apps is Android from Google and iOS from Apple. On behalf of them, China also started to shape them out in the Smartphone sales as they recently said that the sales would kick out well for them soon in the Market by pushing down the Android and  iOS. Now Alibaba competing with Android internationally.

Their main aim to emphasise is Android as Google’s Android plays an important role in the World all through which also at times disappoint the Chineese traders where in some places it is banned to use the Android Usage in China and also the recent reports says that there are 1.7 Billion Activation of Android Market and apps for three days in a week which provides a enormous amount of profit for the Google despite of their Search Engine Works and SEO. They are now pushed up due to their works and updates where they started to earn in a mode of premium activations. However methods are influencing in Apple to lay down the usage of Android in the International Market so that they can bump themselves up in the World Smart Phone Market. As China are leading back in the World’s Smartphone market they have planned to come up in that also after the rise in their technology.After trying to beomce a super power country their mode of profit can also increase their total outcome by Billion Dollars.

Their worldwide trader AliBaba has now developed a software which challenges Android in the International Market. Its Managing Director Mr Zhengh believes that Alibaba’s latest Software, Aliyun can make a total remark throughout the world in terms of Commercial hit.This Software included with a creation of 1650 Engineers and it was started on September 2011.

Zhengh says that “We were highly concentrating in making these sort of softwares in the past and finally found a way in which the people all through the world can be fulfilled now with their desired choice.Aliyun can really make a mark in this and thus they are believed to be strong in the World.Once it gets released then it rules the World.”