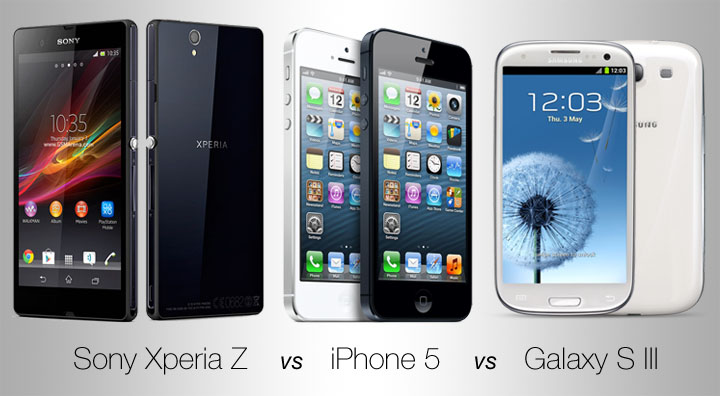 This year Consumer Electronic Show witnessed the launch of many exciting gadgets. From mind-controlled objects to water proof cases, from the smart watch to the smartphone, the CES had everything a tech show requires.

No doubt, Z is a powerful smartphone with specs that can easily rival all other smartphone in the market. But it is not alone. There are a host of other smartphones which have been launched, from which new entrants like the Z, face competition. We have zeroed down the iPhone 5 and the Samsung Galaxy S3 as the two main phones currently in the market that can still give the Xperia Z, a run for their money.

After the sad demise of Steve Jobs, this was Apple’s first iPhone launch. iPhone 5 had to step in the big shoes of the 4S, and in the same way, Mr. Cook had to show to the world that Apple had not run dry of innovation.

The iPhone 5 can be described as ” the taller, thinner and lighter” version of the iPhone 4S. But innovation ? Yes, you can fit 5 row of icons on the homescreen now. And add to that, a new aluminium body, a 16:9 aspect ratio and the professionalism of Apple. You get an iPhone 5.

After the massive sales of Galaxy S and Galaxy S II, Samsung had to deliver something strong and ingenious to its user. And it came out with the Galaxy S3, and needless to say, we were not dissapointed.

Bigger screen size, lightweight, nature-themed. These are the stiking features of the phone. With a 4.8 inch Gorilla Glass 2-enabled touchscreen, this phone was a massive success in the market (previously dominated by the iPhone ).

It showed the whole world two things:-
1. Bigger is certainly better if it has got such an exemplary display.
2. It is not hard to make a phone that can rival the awesome-ness achieved by the iPhone.

The Sony Xperia Z has a massive (and impressive) 5 inch screen which is 0.2 inch larger than the Galaxy S3 (which is explanatory owing to the fact that S3 released before Z.) On the other hand, the iPhone 5 only has a 4.0 inch screen. iPhone 6 needs to address this issue.

The Sony Xperia Z again wins this one with 441 ppi. The iPhone 5 comes second with a pixel density of 326 ppi ( There is a wide margin between both of them) and the S3 coming 3rd with 306 ppi (Something Samsung might improve upon in the anticipated S4.)

All of the phones have got multi-touch enabled with Sony Xperia Z, having 10-finger support ( which is awesome enough to blow your mind). Sony Xperia “owns” the other products in this segment.

2. Camera
Let’s discuss about camera, shall we ? Camera and its applications have become very significant today. Many people have not migrated to those OS which don’t have apps like Instagram etc. Suprising ? It is so.

In terms of mega-pixel, iPhone 5 and Galaxy S3 feature the same 8-MP camera. iPhone has an iSight Camera ( Apple does love to name and patent everything it can), whereas the camera on the S3 is your camera-next-smartphone kind of device.

Xperia Z defeats them all by a 13.1 MP camera and we all do know that the quality of pictures taken from a Xperia phone is always good.
But the MP on a phone doesn’t matter after HTC released a phone having 5.0-MP camera but with “ultra-pixel” technology.

Winner in this segment :-No specific Winner. But going by pixel and past record, Sony Xperia Z is recommended.

Talking about RAM, 1 GB has become a standard for all smartphones ( high-end or budget ). This is what you will find in the Galaxy S3 and the unapologetic iPhone 5. S3 can be excused for being an “old” phone. On the other hand, Xperia Z going by the market trend, has a 2 GB RAM.

Winner :- Sony Xperia Z. Ram is important if you want to run high-end games on your smartphones, plus it gives you bragging right.

4. Processor
By logic, the Xperia Z is a new phone. It has to have better chipsets, GPU etc than the iPhone 5 and Galaxy S3. And so it happens. Sony Xperia Z has a 1.5 GHz quad-core processor which is certainly strong than the A6 chip present on the iPhone 5. Apple does like to keep things a secret. Samsung Galaxy S3 is powered by a 1.4 GHz quad-core processor, which was considered “the best” when S3 hit the market.

Talking about the GPU segment which is now as important as the chipset,  Xperia Z agains trumps over the other phones. With a Adreno 320 GPU, Z can handle gaming better than S3, which is powered by a Mali 400 GPU. Adding to that, LG Optimus G performed better than S3 in this section.

The introduction of S3 will always be the turning point in the kind of phones which were made. It sparked a trend, to have a smartphone. But as of now,its offically old but still worthy enough to give the “young guns” a run for their money.

Overall Winner :- Needless to say, Xperia Z outperforms others. Well, it is a new smartphone in the market and in the coming days it would face competiton from One X+ and the S4.