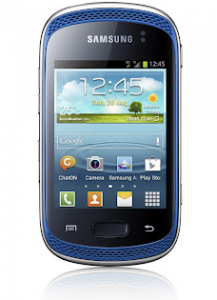 Samsung adds another smartphone to the Galaxy series. The new smartphone which was officially launched on Tuesday, is known as Galaxy Music. It will also be released in a dual-SIM version with the name Galaxy Music Duos.

The Galaxy Music runs Android 4.0 (Ice-Cream Sandwich) and is specially designed for music lovers. The smartphone comes with dual stereo speakers, built-in FM radio, a state-of-the-art Sound Retrieval System (SRS) meant to mimic 5.1 surround and SoundAlive technology and many more. Other features include 3-inch QVGA 240×320 pixel display, 512MB RAM, WiFi connectivity and 4GB internal memory. It also supports external microSD card up to 32GB, so that you can store all your music collection in a single place.

The Galaxy Music also offers a dedicated Music key so users can easily and quickly access the music player. The price and availability of the phone is not yet declared by the company. Samsung Galaxy Music was first spotted in the official list of Samsung android smartphones set to receive Jelly Bean update.