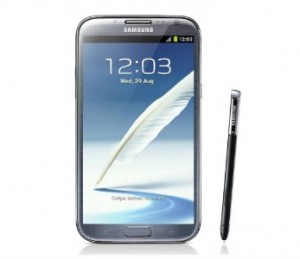 The much awaited tablet from Samsung, the Galaxy Note II was launched at the IFA (Internationale Funkausstellung) 2012 in Berlin on Wednesday. The new Samsung Galaxy Note II looks awesome and has a slightly larger display than its predecessor.

Galaxy Note II comes with the unique S-Pen digitizer and the device is loaded with a few S-Pen compatible apps. A very new and unique feature called “Air View” comes with the phone and it allows users to hover the S-Pen over e-mails, images and videos to preview the content without touching its screen.

The large screen makes the android phone more like a tablet and is suitable for playing games and watching videos. Samsung says the new android phone Galaxy Note II will go on sale in Europe and Asia in October. The price of the device is not yet announced.