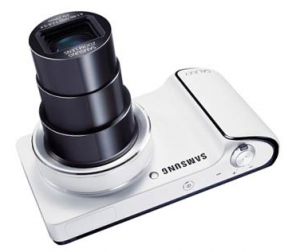 Finally, Samsung has released its much awaited android based camera in the India Market. It is called Samsung Galaxy Camera and is up for sale in India, after two weeks the device went up for pre-order in Samsung eStore.

The all new Samsung Galaxy Camera runs on Android 4.1 jelly bean and comes with some unique features. This android based digital camera sports a 4.8-inch S-LCD display and a resolution of 1280×720 pixels. It is powered by a 1.4GHz quad-core Eyxnos processor. Other features include 16 megapixel sensor with 21x optical zoom,  microSIM slot, microSD card slot and also supports 3G along with Wi-Fi connectivity. The users of Samsung Galaxy camera can backup captured images to the cloud and also can edit the images with the inbuilt photo wizard applications.

Samsung also pre loaded the device with some cool apps to help the user with photography. Users can also download vast number of camera applications from Google Play Store.

You can buy Samsung Galaxy Camera for a price of Rs 29,900. Nikon also has come up with a similar device which runs on Gingerbread, cost only Rs 20,950.