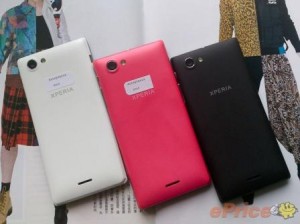 Another new android smartphone from Sony has been leaked in internet before its official announcement at the IFA 2012 event and is to be held in Berlin on the 29th of August. The name of the leaked device is Sony Xperia J or ST26i which is said to be a entry-level device from Sony.The images of the device have cropped up on a Taiwanese website ePrice along with a set of purported specifications.

It is reported that the device, Sony Xperia J will sport a 4” inch WVGA touch capacitive display with a resolution of 854 x 480 pixels. The device will run on Android 4.0.4 Ice Cream Sandwich version of mobile OS and will be powered by a single-core Qualcomm Snapdragon CPU that clock at 1GHz.Other notable features of the Sony Xperia J include 5MP camera with LED flash, Wi-Fi, 3G with HSPA and Bluetooth, GPS etc.

From the above leaked images you can see that Sony Xperia J android phone will be available in three colors- pink, white, and black. The photos all confirmed that the device will have a regular candybar design.

You have to wait for the official announcement at IFA to know more about the device.As soon as we get some more information on the new Sony Xperia J, we will update our readers about it.