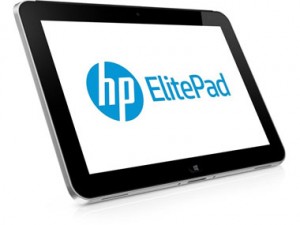 HP announced a new Windows 8 based tablet for business users, the HP ElitePad 900. This new tablet comes with a 10.1-inch screen with a resolution of 1280×800 and also covered with Gorilla Glass 2. It weighs 1.5 pounds and sports a thin 9.2mm aluminum exterior.

The HP ElitePad 900 comes with an 8-megapixel rear camera and a 1080p front-facing camera as well. The new tablet is powered by Intel “Atom Z2760″ processor which is also known as the “Clover Trail” powering it. Other features include 2GB of RAM, external memory supports up to 64GB, 4 USB ports, HDMI and VGA out ports, 9.2mm thick, weighing just 1.5 pounds and many more. It can also run softwares like as Word, Excel, PowerPoint etc.

The HP ElitePad 900 will be launched in US in January 2013. The price of the tablet has not been announced yet. It is one of the most awaited tablet from Hewlett Packard.