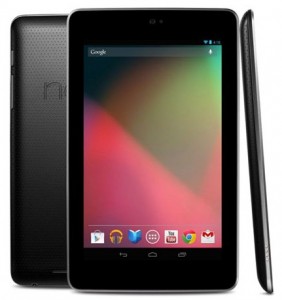 Finally Asus has launched their very first Nexus tablet in Indian market. The 16 GB model of the Asus Nexus 7 would sell with an MRP of Rs 19,990. The same model sells in the US for only $199. So in India the device is selling for almost double its price.

Initially Asus announced two variants of Nexus branded tablet-  8GB ($199) and 16GB ($249). But on October 29, Asus announced that the 8GB variant will be discontinued. They also reduced the price of 16GB model and introduced a new model with 32GB of storage space.

This is a cheap gadget, comes with lots of new fetures. It was also named ‘gadget of the year’ at London’s T3 Gadget Awards 2012. Asus Nexus 7 sports a 7-inch screen with IPS (in-plane switching) screen with a resolution of 1,280×800 pixels. Other features include 1GB of RAM, 1.3GHz Nvidia Tegra 3 quad-core CPU, Micro-USB port, 1.2-megapixel front camera, weighs around 340 grams and many more. Unfortunately, there is no back camera included with this device.

Last week, Asus claimed that they are selling nearly one million Nexus 7 tablets per month. Many online retailers have been selling the Nexus 7 in India for last few months. So, if want to buy a Asus Nexus 7 tablet then contact your nearest retailer.