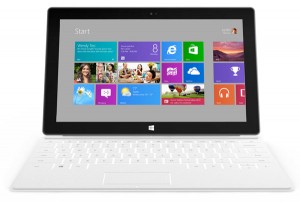 Surface tablet is Microsoft’s first self-made tablet computer in the market which comes with lots of new features. Today, we are sharing 6 best features of Surface tablet.

Surface tablet comes with a completely new Home Screen. There are no icons and folders in the Home Screen.  Instead, it contains tiles, which can dynamically show information. Depending on the resolution of the Home Screen, you can see around 25 to 20 tiles.

Microsoft Surface Tablet sports a 10.6 inch screen. The skin is remarkably thin and durable. Its 16:9 aspect ratio makes it ideal for browsing and watching videos.The Gorilla Glass 2 offers protection against falls and scratches.

For the first time in history Microsoft designed a new operating system for tablet and it is known as Windows 8 RT. Surface Tablet is Fully loaded with Office 2013, videos and games, Xbox music, Skype, Twitter, Facebook, Flickr, Internet Explorer 10, MSN, Outlook and many more.

Another new concept available in Microsoft Surface Tablet. Surface users will have to download all the softwares,  through Windows Store, a concept that is similar to app stores like Google Play and Apple app store. Uninstalling an app is also become so easy. Just select an app and click uninstall.

Another unique feature comes with Surface Tablet. Surface gives its users the opportunity to use two screens at the same time. Now you can browse internet while watching a video, checking emails while simultaneously browsing the web.

Surface Tablet comes with a strong battery. It can run almost nine-hours on a single charge and only takes around two hours to completely recharge an empty battery.