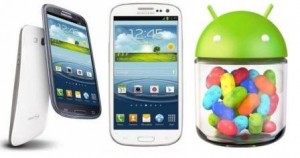 Samsung fanblog SamMobile reports in a post that Google’s latest mobile operating system Android 4.1 Jelly Bean updates may be just around the corner for owners of the Galaxy S3, Galaxy S2, and Galaxy Note. Among all of them, Samsung Galaxy S3 will get Android 4.1 very soon and is expected to get the update sometime during August and September..

SamMobile also says that Samsung’s engineers are currently busy in testing the software ahead of the planned release for the handset which had shifted over 10m units since the launch at the end of May 2012. Other than that, it is said that Samsung is testing Android 4.1 Jelly Bean for the Galaxy S2, and initial tests do look just fine.The source further states that if Samsung decides for whatever reason not to update the Galaxy S2, then owners are likely to get a Value Pack. But it is highly unlikely that Samsung will not update Galaxy S2 to Jelly Bean.

We all know that Jelly Bean comes with lots of new and interesting features.Android 4.1 has a more robust notification tray, better homescreen customization, Google Now (Google’s Siri), and many other smaller updates. It’s not a major overhaul of Android, but does smooth out the experience.

Samsung has yet to confirm it officially about the updates.So, if you are an owner of a Galaxy S3 or S2, you have to wait for few days to get the official confirmation from Samsung.